skip to main | skip to sidebar

12 Essential Rules to Live More Like a Zen Monk : zenhabits

This is a fantastic article on how to gain some of the peace of mind through some easily practiced Zen methods.

12 Essential Rules to Live More Like a Zen Monk : zenhabits:

'via Blog this'
Posted by Unknown at 8:38 AM No comments:

This is the very skilled Master Alex Dong performing the slow set of his family's Tai Chi. His great grandfather studied incredibly closely with Yang Cheng-fu from the Yang Style lineage and Master Li Xingyuan from the Hao Lineage. His family has produced many top notch teachers and they have a fantastic fast form set that must be seen to be believed.
'via Blog this
Posted by Unknown at 8:32 AM No comments: 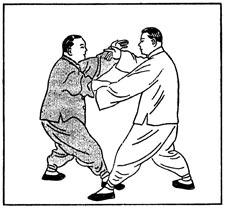 In Tai Chi there is a practice that players have called Push Hands or Tui Shou. This practice involves two players touching hands and attempting to keep their own balance while putting the other opponent off balance. This is a pretty fun and neat game but too often it degenerates into some really bad Sumo wrestling. I have often told the story of how I like Yoga but I prefer Tai Chi because when I practiced Yoga I would be very calm and peaceful until someone came in and said something to annoy me. Tai Chi forced me to become comfortable with people even in the case of them touching me.
Many times when someone lays hands on us there is an automatic reaction to tense up and protect ourselves. Tai Chi Push Hands teaches us the very important lesson that this tensing up does nothing to protect us. It in fact makes it easier for our assailant to harm us. A good push hands friend of mine who is much better than I am taught me the valuable lesson that when you are being pushed you have to sense where the force is going in your body and then let go of that point of tension. This is a strange phenomenon and is better felt than explained. So we have this interesting concept where in order to defend ourselves we must relax and not fight against the person attacking us.
This concept is amazingly difficult to grasp. But let's take it out of the kung fu arena and into daily life. You come to you and yells: "Why did you screw up the paperwork on the Boberson account?" Everyone's natural reaction is to blow up and say: "How dare you speak to me that way! And I did not screw anything up!"
Now let's take this situation and say someone has come in yelling at you. They are insisting that you have screwed up in some way. Let's feel where this is hitting us. Is it my ego? I go there and relax that. Then I look at it again? Is it my feelings? I relax that. Then after going through my points of stress and dissolving them I can ask questions that will garner actual results. Asking questions and assessing rather than responding to an attack with a knee jerk attack reaction. This is the essence of push hands. Power and ability come not from being strong and hitting back but from learning and listening. You can then apply an attack of your own or allow the attacker to simply play out their attack while you remain centered and unharmed.
The paradox of Tai Chi is that power comes from relaxation and letting go. Not from pumping up and getting strong. This is the most useful lesson you can learn. Adapt, analyze, assess and do not panic.
Posted by Unknown at 3:11 PM No comments: